skip to main | skip to sidebar

Last night concluded the quarterly series I've curated for the past three years. For three years every three months I have accumulated some of the most inspiring performers I've had the honor to know and call friends in New England. For this final installment I brought together some really special people. The night started off with Id M Theftable. Just two days off the plane from a tour of England, tired, disoriented, jet-lagged, he was fantastic. Voices came from him that seemed impossible from such a body as his. 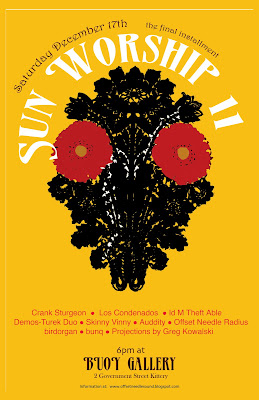 Second was the trio Los Condenados. A firey fury of electronic sounds melded with the vocalizings of Andrea Pensado and the horn playing of Jules Vasylenko. Walter Wright provided controlled electronic chaos via his various circuit boards of noise. Third round was Eric Dahlman and Eric Nugent of the Auddity trio, performing as Eric and Eric or Audd. Next up we had bunq present a film strip about little boy who wanted to be an artist. Then Crank Sturgeon. Next I performed with Dei and Marc Bisson, an homage to my first show in Manchester, at the old M.A.P. gallery. With only three people in the audience we decided to just perform together as one set. That started a lot of things for me in the New England free improvisation community. Greg Kowalski projected on the wall behind us and all that was missing was Steve Norton, our horn player/percussion guru who couldn't make it as he was performing in Somerville at the time. After our set came Skinny Vinny. They are always a crowd pleaser and are able to cross boundries and offer something people can relate to. And unlike many of these performers whom the uninitiated may not be able to discern whether or not they are educated in their line of performance, or whether they are novices or seasoned veterans, Skinny Vinny is easily identifiable as two performers who know their chops. Another demonstration by bunq defining the Winter Solstice and describing some of the traditions around it, as well as sacrificing a stuffed dog and distributing beef jerkey from amongst the synthetic fill. The evening concluded with 2/3 of Mystic Out Bop, Kit and Frank Turek. It was one of the best Sun Worship events I could recall, the Winter Solstice always being my favorite and seeming to involve some excellent performances. I look forward to visiting in the future and setting up the occasional Sun Worship show. And who knows, somebody might carry on the tradition once I'm gone. But I don't think it will be quite the same. Thanks to all who have come to perform or witness this special event. It's really meant more to me than I can put into words. The series has been a way I was able to participate both in the free improvisation community and the local community in Kittery, melding the two, trying to present art to this area that has been inspiring me. And now it is time for another chapter.
Posted by Offset Needle Radius at 1:33 PM

Offset Needle Radius
Portland, ORegon, United States
Offset Needle Radius became a primary focus in February of 2008 as a vehicle for solo improvised experimental performance from a lifetime of underground punk rock and metal influences. To present a language of sound, influenced by current events and the instant, personally and globally. To sonically describe the emotions of the human experience, hopefully a shared experience between performer and audience; a moment of transcendence. The name derived from a condition found in some Chinese fabricated basic electronics where a dial is surrounded by a circular array of numbers or ticks, a name with far less mileage than that of the creator, Joshua Baker. To contact, email: offsetneedlesound(at)yahoo(dot)com

Get updates sent to email...