skip to main | skip to sidebar

When::: Saturday December 4th, 8pm
Where::: Andrew's Loft, 381 Congress Street Boston
Andrew Eisenberg has extended a great invitation to me which I thankfully accept.  I'll be performing on a bill with internationally known  Judy Dunaway at Andrew Eisenberge's loft on Saturday December 4th.  The theme of this event is "Balloons, Bicycles, and Bodies".  Fulfilling the Bodies portion will be Bodydrama - movement by Joe Burgio , Rachael Rosner, Betty Wang; sound by Lou Cohen, Matt Samolis, Walter Wright.

Judy Dunaway has explored New Music utilizing balloons as primary sound source since the late 1980's.  She's perfomed with many vetrans of New York's New Music movement since the late 80's and has written over 40 pieces of music for balloon. 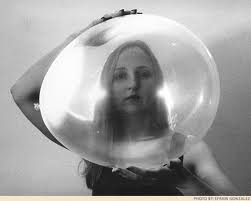 Find more artists like Judy Dunaway at MySpace Music
Judy is currently a visiting lecturer for the Massachusetts College of Art in the Art History department.
Andrew's loft is at 381 Congress Street in Boston.  This space used to be the Mobius offices.  Show up around 8.

THe long awaited Offset Needle Radius Somerville premier has happened.  My sincere thanks to Lou Cohen and Lou Bunk for hosting the series and inviting me to participate.
Weeks prior to found me in the studio after work, casting into the night's dark embrace working on the expanded vocabulary of my untrue cast of spoked hoops, new movement, new sounds, new dialogue.
The night concluded with the participants packing gear, brief conversations, and hauling equipment out to vans and cars parked outside on Somerville Avenue.  It was probably around 11pm.  The last performance was birdorgan, accompanied by Laurie Amat on vocalizations and Lucio Menegon a.k.a. Kingtone on prepared guitar.  Diedre was off on an island off the Maine Coast creating her own mayhem for the evening.
Prior to birdorgan and friends was Shawn Greenlee of Providence.  He triggered sounds utilizing a lit sensor picking up color and shape drawn on a piece of paper at close range, fed into a laptop and then amplified on a fender 212 Combo and GK solid state amp into some stacked 6/10 speaker cabinet.  The computer screen lit with waves of distorted color accompanying a shrill distorted scream of tones in unison.
After my set and a brief repose the duo of Noell Dorsey and Brendan Murray performed a piece for two voices , crash symbol, tom drum and synths.
I built a few new piezo contact mics and taped them down good to 50cm x75cm plastic sheets Dei Xrist had bestowed upon me weeks prior.  Bicycle wheels were rolled on the floor like boomerang yoyos try as they might to return to the Master's warm hand, lose momentum until succumbing to a slow motion wobble dance until a crescendo of metallic death cry ends in still silence the wheel looses all vibration.  The hand grabs and returns it to life to repeat this ritual again, again, with the others rolling and crashing.  Plastic contact sheets on the wall and floor a wheel finds its way and rests there with aggressive hisses now amplified the metal scrapes along the plastic sheet.  A metal rod produced assists in each spoke speaking its harmonic identity.  They rang and hissed each with its own 11/32nds out of tune with its neighbor.  Subtle input from two other wheels resting aside the A/V cart which was also amplified.  Onto the Aalpa Wheel, the First and Best of them, atop the TS 2.  It blobbered, trickled, cackled and swooned in a outpour of emotions for nearly 10 minutes.
In all performed for about 30 minutes.  It felt good, complete, not rushed nor bullied from the switch in the line up from third position to first.  After my eminent start was announced I stood bent in half holding my charges silently at my side until the room settled down to a pre dawn hush of 60Hz.  THen they began to roll and tumble as I described.
It was the first test of a pair of JBL Eon 15 G2's I picked up in Woburn on the way down. I met George in a large ballroom linened for a wedding party of 95.  Staff milled about the empty room making small adjustments to the setting.  George was the wedding D.J. that night and he had some Rock Classique howling threw them.  I didn't need the demonstration.  I knew what I was getting.  Setting them up at the THird Life Studio I noticed one of the volume pots was seriously fucked up scratchy.  It was a little annoying at the time but I don't mind in the long run.  I'll fix it when I've finally had enough.
Eli and I opted to leave the van where it lay, a block away on Bow Street.  Might as well as I've already gotten the parking ticket, a reward for not feeding the meter that hid in complete dark blackness beneath the tree beside the van.  I had no idea those meters were nocturnal.
After circling the globe over and over in tighter offset radii until we were circling around Union Square looking for a landing, getting off course, righting ourselves, and finally exiting the vessel.  That's when I wish I had noticed the unreadable writing on the shadowed toll troll demanding rent on the curb I had taken.  But I didn't . Instead Eli and I crossed the street and walked, in search of food.  In a window was Marc Bisson, Mike Daily, and their friend and a third of Prehistoric Horse, Lucio Menegon.
They were eating large fresh looking sandwiches full of stuff.  Food friendship and information all in one stop.  Birdorgan was just off a week trip down to NYC for a few performances and Lucio had just performed at 119 Gallery the previous evening.
I failed at Boston navigation once again, guessing in leu of street signage as seems to be the tradition.  I think it may be necessary to mature there or at least drink the water for an extended period to gain the homing pigeon extra sense of locality to efficiently navigate the paved cow paths Boston is built on.  No matter the hassle of hunting for signs denoting our current and desired location I am always glad to be in the heart, just a curb away from being swept along with the trash in the street.  It is eye opening alive and complex.  Next time I'm bringing along a map.  THat will be December 4th at Andrew Isenberg's loft at 381 Congress Street in Boston propa.  See you then.

If you're lost and looking for a specific location in Boston, just remember::: it's right next to the Dunkin Donuts.
Posted by Offset Needle Radius at 1:58 PM No comments:

Our favorite stressed out fish Crank Sturgeon has put together a last minute celebration to mark the coming of the Three Wise Tens, this Sunday October 10th, 2010.  Wait, if I'm correct, the date on that very day will be 10/10/10!  How could it be!  It must surely be a universal convergence.  But what does that date really represent?  It's been ten years, ten months and ten days since Y2K!  2000, a new era of stuff that, well, is a lot like stuff before but more faster and techier.
Performing their interpretation of the significant convergence of 10's will be

I am sharpening 10 bicycle wheels to be wielded as ancient weapons to defend the Trifecta of 10's from outside subvergence.  Come see me spin, scatter, roll and tape these ten beasts of sacrificial offering.This will take place at Apohadion Theatre


Pictures by Elizabeth Thompson
Things will(didn't) begin promptly at 8pm so don't fuck around.
Posted by Offset Needle Radius at 8:00 PM No comments:

Offset Needle Radius
Portland, ORegon, United States
Offset Needle Radius became a primary focus in February of 2008 as a vehicle for solo improvised experimental performance from a lifetime of underground punk rock and metal influences. To present a language of sound, influenced by current events and the instant, personally and globally. To sonically describe the emotions of the human experience, hopefully a shared experience between performer and audience; a moment of transcendence. The name derived from a condition found in some Chinese fabricated basic electronics where a dial is surrounded by a circular array of numbers or ticks, a name with far less mileage than that of the creator, Joshua Baker. To contact, email: offsetneedlesound(at)yahoo(dot)com

Get updates sent to email...